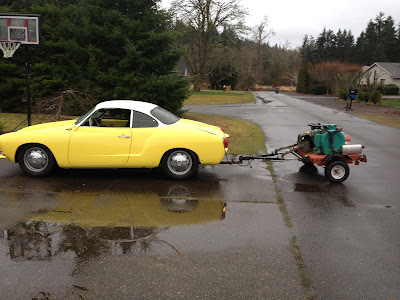 Yessiree, us bootstrap EV'ers don't cotton to all the attention that Johnny-come-lately General Murders has claimed with their so-called electric vehicle, the "Volt". If somebody wants an electric car that drags around an engine just in case one needs a charge on the fly, that's so old school. BUT, Karmann Eclectric has yet to have the heady experience of drinking while driving, so I figured it was about time...


What we have here is an oooold ONAN Emerald generator set, first salvaged by John Wayland in the 1990's and used for trackside charging and an historic range-extended run to Mt. Hood, briefly mentioned in this obituary for the Red Beastie..

Anyway, the gencart had sat for years in another EV'ers back yard before I acquired it, and then I sadly let it languish for another six years before today's test. With the help of an old-timey neighbor of EV Expert Tim Ritchey, we got it running again, and after a fresh batch of fuel and warmup, it proceeded to pump out enough current at 160V to maintain over 12 amps of charge current(after charger losses) at 260 to 300 volts into my pack. Then during the road test, when heavy throttle application sagged the pack below 180V, the charger put out as much as 18 amps! I dunno what special sauce Wayland put into the little twin cylinder Emerald back in the day, but the electrical components were still cool after a solid hour at over 3kW output. This little gencart may be much more practical than I hoped! With the generator mounted on it's rubber dampers aboard a trailer hanging out behind the Karmann Eclectric, there wasn't any noticeable increase in vibration compared to pulling dead weight, and the noise was still significantly less than my aircooled Volkswagens! All in all, I'll call this Revolted Volkswagen a success! However, the generator immediately tripped the safeties on my J1772-compliant SPX EVSE, so it's not ready to charge a modern EV....... More to come!
Posted by Jay Donnaway

http://tinyurl.com/7alsf38
And this from a man who knows creative machines! I was just in a Starbux today thinking; "What an uninspired, dumbed-down espresso machine they have here..."

Who made the Karmann Eclectric